In 1939, the Rev. Richard D. and Lena Douwstra contributed the funds to build Douwstra Chapel, now known as Douwstra Auditorium, in Central Hall. When construction on the building was completed, the college did not have funding for seating—so it successfully auctioned seats for $10 each. Donors also helped the college purchase a Steinway grand piano, hymnals and a carved rosewood pulpit.

By late 1941, donors also helped raise funds for an organ. A few weeks later, the United States entered World War II. Thankfully, Central’s three-manual, 32-rank Kimball organ was the second to the last to leave the factory before essential materials used to make the organ were rationed by the Office of Price Administration. The new organ was dedicated during Homecoming in October 1942 at the Sunday vesper service. The organ served the college until 1984.

In 2016, James ’66 and Beatrice Minium Hoekstra ’64, left an estate gift of $1.2 million to the college. A portion of the donation funded an endowed music scholarship. The remainder supported renovations to Douwstra Auditorium. Renovations on the first phase of the project began in December 2017 and were completed in June 2018, when fundraising efforts began for the second phase of the project. 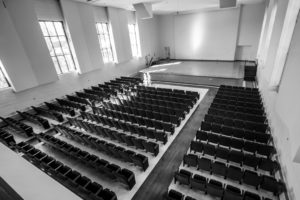 Photo of Douwstra Auditorium before 2018 renovations. 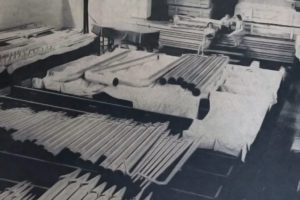 The first pipe organ to be installed in Douwstra Auditorium. 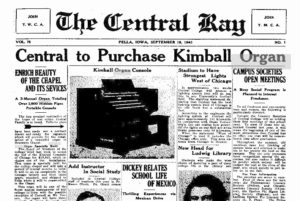 An article from The Central Ray featuring the original organ.