Boardwalk House, located at 300 Broadway Street in Pella, Iowa, on the Central College campus, was constructed in 1914 by Adolphus Waechter. Waechter was the second of four generations to own and operate the Waechter Lumber Yard. The home remained in the Waechter family until it was purchased by Central Professor Richard Whitaker in the 1960s. In 1989, Whitaker sold the home to Central. For several years it served as a dormitory for one of the college’s sororities. Later it was used for storage.

In recent years, the college determined the home could be better utilized if it were moved from its location on Broadway. In 2018, the college partnered with the Historic Pella Trust to give the home to a new owner willing to relocate it.

This summer, the home found its new owner. We anticipate the home will move to its new location in mid- to late-September 2018. This page was created to provide updates on the house-moving process for people who are interested. Check back often! 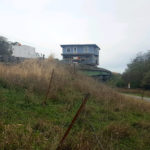 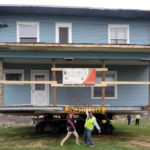 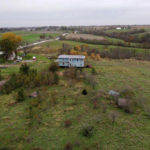 Boardwalk house covered lots of miles on Thursday and made it all the way to Mint ‘N More Farms. Congrats to Mikol Sesker, owner, and Billy Bell Housemoving on the successful journey. Boardwalk house made it to its designated resting spot Wednesday night at the railroad on Highway T17. Crossing the bridge was the highlight of the day.

Depending on how fast the trip progresses, the house may spend another night on the road near Smith Grain and Fertilizer. If things move along swiftly (a relative term when moving a 110-ton load) the house may make it as far as its new home at Mint ‘N More Farms. 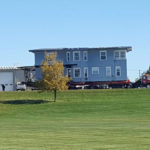 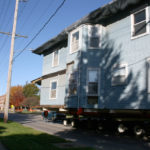 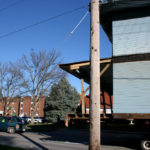 Boardwalk House has made it to its overnight stop at Brown NationaLease. Tomorrow, the house will be moved down Highway T17 to just north of the railroad. The Boardwalk House on the Central College campus will start its 20-mile move on Tuesday, Oct. 23. The house is shown here on the semi that will take it on its three-day journey to Mint ‘N More Farms near Knoxville.

Billy Bell House Moving of Colfax plans to have the house on the road by 9 a.m. The house will leave the parking lot where it is currently located on the corner of University and Broadway Street in Pella. It will then head east on University, South on Main, East on Oskaloosa and South on Clark to Brown NationaLease just south of Pella Corp. Drive and Truman Road. The house will spend the night at Brown NationaLease. The goal is to arrive there by 2 p.m. to avoid school and shift traffic.

For individuals interested in watching the start of the move, please stay on the west side of Broadway or the southwest corner of that intersection in the Central parking lot. This will keep you and the home safe.

If you encounter the house on the road, we thank you in advance for your patience. For your safety, please stay clear. Welcome sunshine! Roof demolition and salvage started this week. Once the roof is removed, the house will be pulled out into the parking lot for final adjustments. If final preparations go smoothly, the house will be on track to move next week—the week of Oct 22.

Monday, Oct. 22
Move the house from its current location to the parking lot east of the house.

Tuesday, Oct. 23
Hit the road by 9 a.m. Leave the parking lot, head east on University, South on Main, East on Oskaloosa and South on Clark to Brown NationaLease just south of Pella Corp. Drive and Truman Road. Arrive by 2 p.m. to avoid school and shift traffic.

Wednesday, Oct. 24
Leave Brown NationaLease and head down Highway T17 to just north of the railroad.

Thursday, Oct. 25
Head from the railroad on Highway T17 to Old Highway 92, Highway 92, Highway 5 and gravel roads starting at Quebec Street. Depending on how fast the trip progresses, the house may spend another night on the road near Smith Grain and Fertilizer. If things move along swiftly (a relative term when moving a 110-ton load) the house may make it as far as its new home at Mint ‘N More Farms. If not, the journey will be completed Thursday, Oct. 25.

This journey would not be possible without the cooperation of Central College, the City of Pella (especially the public works, electric, and police Departments), Brown NationaLease, Pella Corp., Baker Electric and the patience of countless people on moving day! Ever wonder how much a house weighs?

Boardwalk House is now officially off the foundation and on jacks. This house weighs 220,000 pounds—or 110 tons! The team is putting one last dolly underneath the house so that it will be ready to pull out soon.

About that: The rain is impacting the move a bit. The rain needs to stop so the roof can be taken off. It will take four days to move the house—one day to remove the roof and three days for the move. As soon as the weather forecast improves with no rain for at least four days, we’ll be able to hit the road. The side porch has been removed on the Boardwalk house in preparation for the move! While the photo is a bit shocking, the great news is that contractors were able to take it off intact so that it can be reattached once the house has been moved and is on its new foundation. That’s a bit of a simplification of what will be done, but it’s still keeping with the intent of the reconstruction. Movers are currently planning to leave the front porch attached to the house for the move! In addition, plans call for steel beams to be placed under the house this week. Laser scanned image of the front of Boardwalk House. Laser scanned image of the entry of Boardwalk House.

Work continues to progress on the Boardwalk House move. We expect to see activity on the house’s exterior this week with the deconstruction and salvage of porch materials followed by placement of the beams under the house.

Before all this work began, the full house was scanned by True Point Laser Scanning. This allows for not only an exact historical “as was” record, but also a complete set of measurements for contractors to use during reconstruction. See the pictures shared here for examples of the scans.

Utility-related work within the Boardwalk House is in full swing. Plumbing is in the process of being removed, the gas line has been shut off and electrical work is scheduled to begin next. The completion of each of these important processes brings the Boardwalk House ever-closer to a moving date. The roof tiles have been removed, revealing the beautiful wooden shakes. Tarps have been added to protect the structure and will remain in place while students move into nearby Scholte Hall. Additional removal and disassembly will begin in early September.

Environmental Protection Services of Iowa performed the tile removal and Rubel Roofing of Albia, Iowa will be adding the tarps and removing remaining roofing material. A historic home on the Central College campus will soon be traveling to a new location.

After transferring to Central from a community college, Maggie Langenfeld ’21 loves school for the first time ever. 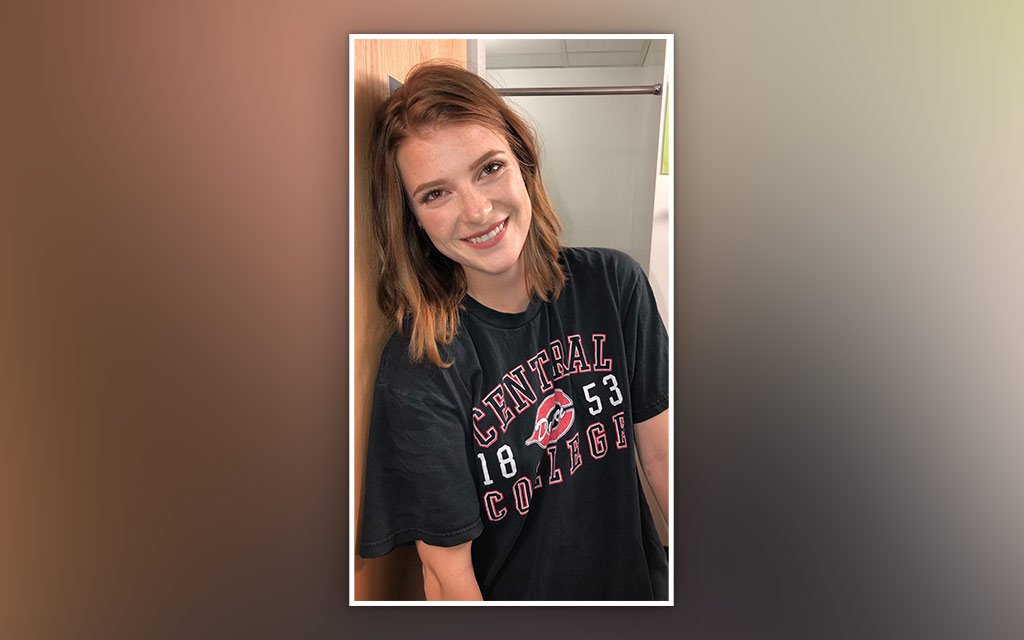