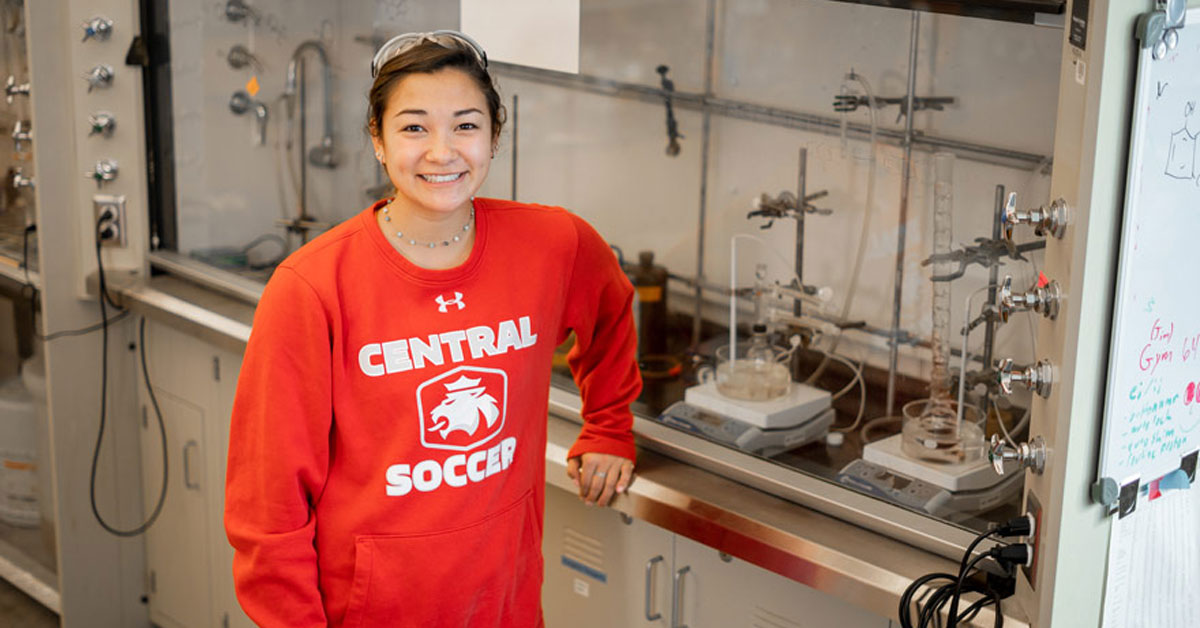 “The biggest thing is push yourself — even if you aren’t sure you’re good enough.”

It started with soccer: Katie Wang ’21 knew she wanted to play and found Mike Kobylinski, Central’s three-time league coach of the year, and his team “fun and welcoming” on an overnight campus visit.

The daughter of a nurse, she also knew she wanted to follow college with medical school. “I liked the idea of staying in school as long as possible,” she laughs. “I’m also really interested in how the human body works.” She also planned to continue learning Spanish.

She jumped right in the deep end, taking inorganic chemistry her first year. That’s even though her strongest subjects had been history and English in high school. “I liked science because it was harder for me,” she says.

“I was comfortable writing about literature, but since coming to Central I’ve really appreciated that I was pushed to learn new ways of writing,” Wang says. Her first-year liberal arts seminar had her experiment with writing short stories and a science-based paper as well. That practice served her well in all her classes, she says, and likely helped her clinch a national honor we’ll talk about in a minute.

So did her interest in Spanish, oddly enough. She enjoyed the subject so much at Central that she decided to major in it, as well as biochemistry — and to spend a semester studying in Mérida, Mexico. There she got an internship at a hospital working with a doctor and medical researcher. She saw for the first time that she could combine research and the practice of medicine in one career.

She’d already gotten a taste of research after she’d asked Professor of Chemistry James Shriver if she could work with him in his lab. She ended up doing two research projects with him. One involved synthesizing a molecule that had promise for helping with targeted drug delivery. The second, working on a process to create indirubin, a byproduct of dye-making that could have medicinal applications as well.

Assistant Professor of Chemistry James Dunne suggested with Wang’s interest in both research and medicine, she should consider a combined M.D./Ph.D. program. That’s her current plan. “It takes longer, but it opens up a lot of opportunities. I could research, practice, teach or combine the three.”

Meanwhile, Wang continued to play soccer — sometimes a challenge given her lab classes. “But profs and coaches have been flexible if I have to be a few minutes late to practice or to leave early for games. They work together to make sure I can do both,” she says. “Some of my best friends have been teammates and being on the team allowed me to find my people faster.” Wang wrapped up her soccer career during the COVID-19 shortened Spring 2021 season. She scored two goals and had two assists in seven matches.

Back to the subject of her writing: Katelin Valster, Central’s pre-health advisor, met with students interested in health care to share additional opportunities with them. Valster and Shriver suggested she apply to the prestigious Goldwater Scholarship. Designed to encourage outstanding students to enter careers in STEM research, the scholarship is highly competitive. “I didn’t think I was going to get it, but Dr. Shriver said it would be good practice for me to write out my research and that it would get me accustomed to writing the grants I’d likely apply for later in my career.”

Wang received word that she’d gotten the scholarship while checking her email in her parent’s living room. “I started screaming and jumping up and down and my dad rushed in to ask what was wrong. I was so excited I couldn’t even tell him,” she said.

She’s also received another honor from Diverse: Issues in Higher Education magazine for her Academic and Athletic Achievements. “That was a shock to me,” Wang says. “It was something Coach Kobylinski nominated me for without telling me.” It is an award based on diversity, academics, service and athletics.

What’s the common thread in all of her achievements? Wang says it’s going for what she wants even when she has doubts. “The biggest thing is push yourself — even if you aren’t sure you’re good enough. I arrived at Central pretty shy. Freshman year I was terrified to ask Professor Shriver if I could do research with him; now I’ve worked with him in his lab full-time and it helped me win a Goldwater Scholarship.”

She’s looking forward to applying to that M.D./Ph.D. program, then becoming a surgeon and medical researcher who innovates new surgical procedures. In the meantime, Wang is gaining valuable experience as a surgical assistant for an oral surgeon in Kalispell, Montana.

Where’s she going to apply? Our guess is she’ll have lots of great choices.