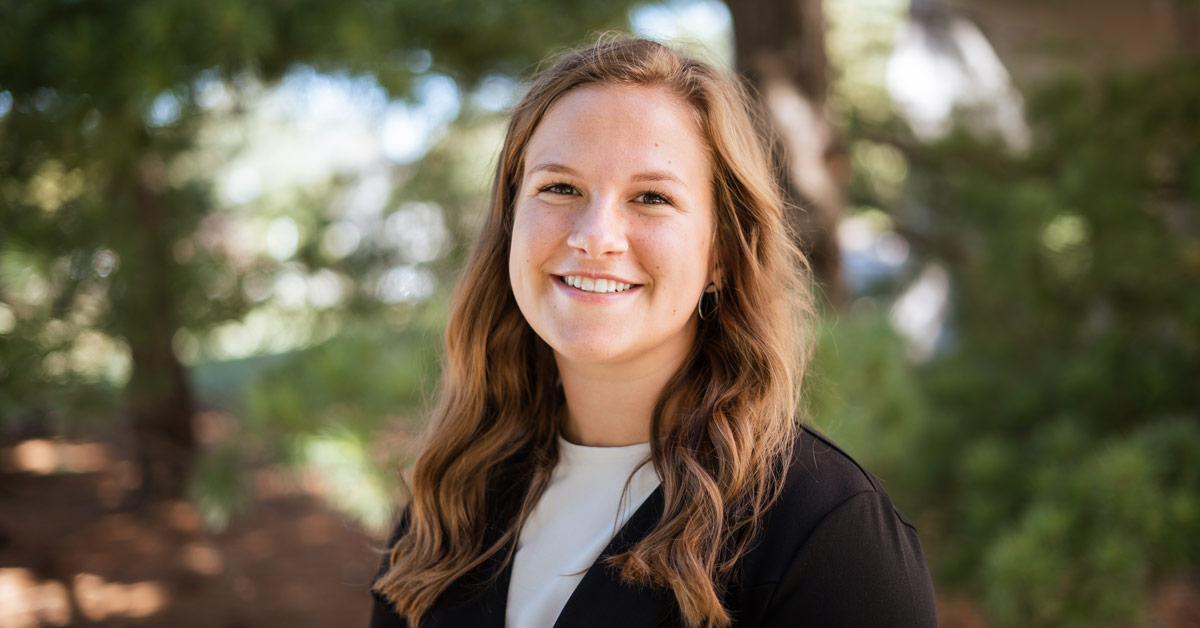 “I never would have imagined myself where I am now.”

Madolyn Clark Johnson ’22 was born and raised in Clarinda, Iowa — an historic town in the southwestern corner of the state. The town of nearly 5,400 hosts annual events like the Southwest Iowa Band Jamboree, Clarinda Craft Carnival and Cruzin’ Clarinda.

Johnson grew up in the same house and attended the same school for her entire life. She knew each of the 70-or-so classmates she graduated with. So, when folks started pushing her toward attending a state school to work toward a dental career, she balked.

“I decided to go into dentistry when I was in eighth grade,” Johnson says. “Then I went to Business Horizons at Central during the summer of my sophomore year, which put Central on my radar. And campus was beautiful in the summer!”

However, as a first-generation student from a low-income family, Johnson was unsure what kind of college would be the best fit for her. And though she applied to several other schools with a similar size and feel, it was the beauty and safety of Central and the surrounding community that sealed the deal for Johnson.

“Pella is just so gorgeous,” she gushes. “It’s such a safe town for everyone — whether you’re male or female. But specifically, being a female, living in a safe town is important. The ability to walk around campus, and even around town, alone or at night and feeling safe is amazing. I’ve never felt unsafe.”

Although feeling safe and being welcomed into the community gave Johnson a secure foundation at Central, those grounding feelings couldn’t overcome her fear of public speaking. Only experience could do that. The only problem was, talking in front of people just wasn’t her thing. So, when a peer instructor asked Johnson to consider applying for Student Senate — which seeks to establish an effective and representative government for Central — during her first semester at Central, she majorly hesitated.

“I was like, ‘Oh, that’s a little outside my comfort zone, but I’ll think about it,’” Johnson recalls.

And though she came to Central a quiet young woman who typically kept to herself, she was persuaded. Johnson applied for Student Senate and was elected by her peers. Johnson spent two years as Student Senate’s treasurer and took the reigns as student body president for the 2021-22 academic year.

“I was terrified of talking in front of even two people,” Johnson says of her public speaking experience prior to serving on Student Senate. Since then, she’s grown through experience, “I had to give two or three speeches to the freshman class just in the first week of school this year.”

Blossoming into a public speaking pro isn’t the only thing she’s done in her time at Central. Not only has Johnson dipped her toes into several STEM-related student clubs, she also has conducted STEM research as an undergrad — opportunities that are few and far between at state schools.

Johnson is on her third year of conducting synthetic organic chemistry research with Jay Wackerly, associate professor of chemistry. At the onset, she mainly got a feel for the lab by working on independent research. Now, Johnson is designing her own research project.

“Dr. Wackerly has been conducting research for a long time,” Johnson says. “He’s had a lot of students throughout the years, and they’ve made this molecule — I’m trying to improve it.”

Currently, the molecule is small and can only fit certain small molecules within it. Johnson’s goal is to widen the molecule’s cavity and increase the holding volume.

Research and regular coursework at Central naturally bonded Johnson with faculty members across campus. She was familiar with the concept of students forming relationships with professors from her time in Business Horizons but experiencing it firsthand was eye opening.

“You always hear about the big schools and how students never actually get to talk to the professors — they always have to talk to teaching assistants,” Johnson says. “Here, if you have a question, you just go knock on your professor’s door. It’s usually already open.”

She has gone to her academic advisor, Ashley Garr, associate professor of chemistry, for advice and support.

Russ Goodman, professor of mathematics and assistant women’s soccer coach, also has been influential in Johnson’s college experience. Goodman was one of Johnson’s first professors at Central and welcomed her entire class into his family’s home for dinner.

“He has seen me grow throughout all four years of college, and I go in to talk to him almost every week, even though I haven’t had a class with him since freshman year,” Johnson shares. “He’s always interested in how I’m doing and how life is going for me outside the classroom.”

In fact, the relationships are reciprocal; several of Johnson’s professors, including Goodman and Wackerly, also trust her so much she has been asked to babysit for their families many times.

As she prepares for the next step in her pursuit of a dental career, Johnson leaned into the support of Jess Klyn de Novelo ’05, associate dean for career development and civic engagement, to prepare for grad school interviews.

“I totally forgot the Career and Professional Development Office could do mock interviews,” Johnson says. “So, two days before I had my interview for grad school, I talked to Jess about doing a mock interview and she got me in that afternoon.

“They help you with your résumé, but they don’t do it for you. They teach you how to do things so when you leave Central, you have transferrable skills.”

The most impactful part of Johnson’s journey appears multifaceted but boils down to a simple concept: creating community.

“Never stop meeting people,” Johnson says. “Get to know everyone; everyone has a different backstory, and you can learn a lot outside the classroom from your peers.”

Johnson is one in a long line of Central students who help maintain Central’s community culture of growth and inclusivity. And it’s an experience she will carry with her forever.

“My Central experience has been amazing,” Johnson concludes. “Honestly, it’s made me grow into the person I am. I never would have imagined myself where I am now.”