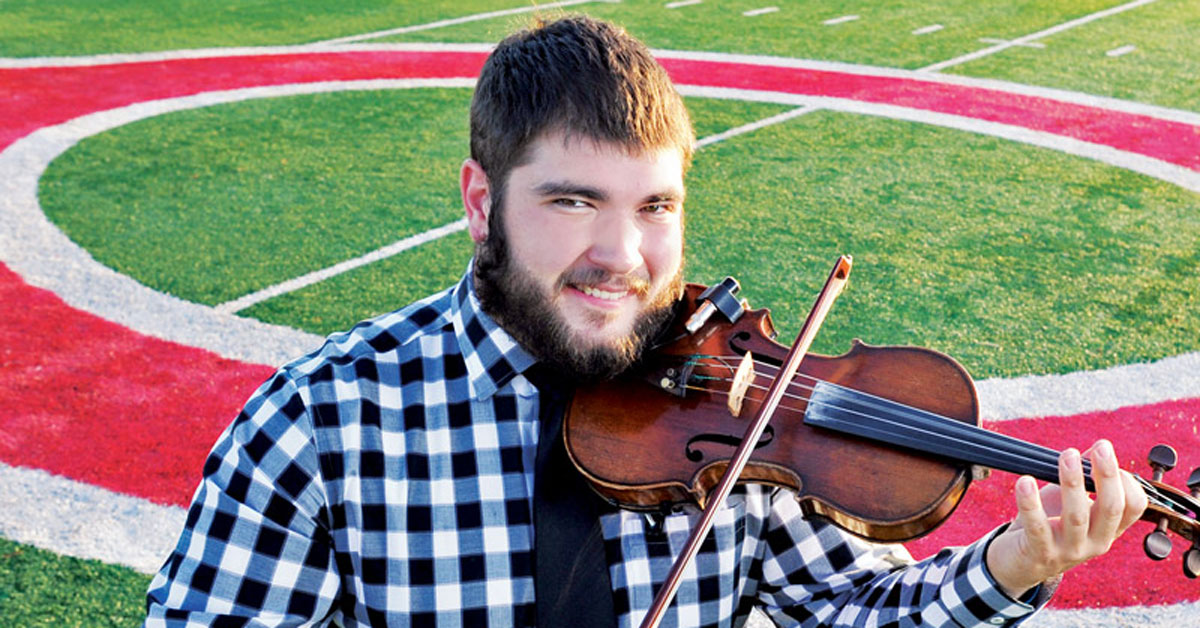 “Central is a place where you can pursue all your interests.”

Ed Henning ’20 is Central College’s country music star. He plays fiddle, mandolin and keyboards and sings backup for Tyler Richton and the High Bank Boys. The band just won Iowa Country Song of the Year from KBOE 104.9 FM with their original, “God Bless the Workin’ Man.” The song was also a contender for New Artist of the Year and Song of the Year Awards at the 2019 Midwest CMAs. Yes, that’s just one level away from the “Big” CMAs with Brad Paisley, Carrie Underwood and friends. The High Bank Boys already have opened for John Michael Montgomery, Locash, High Valley, Jordan Davis and Brett Young.

Henning has been playing music since he was four years old, when his mother noticed him “sawing away with his arms like he was playing a violin,” he says. She enrolled him in classical violin lessons at the Preucil School of Music in Iowa City, where he excelled in playing classical music throughout grade school.

Between his freshman and sophomore years of high school, Henning traveled with the Preucil School String Orchestra to perform orchestral music in Beijing, Tianjin and Qinhuangdao, China. The Preucil Orchestra even performed on the Great Wall of China for an audience that included the first lady of China. After he returned from China, Henning went on to perform in Indianapolis with the Music For All Honor Orchestra and in New York City with the 2014 Carnegie Hall Honors Orchestra.

As a Hartwick-Ladora-Victor High School senior, friends from nearby Montezuma High School asked Henning if he’d be interested in playing country music with their newly formed band, Tyler Richton and the High Bank Boys. Henning grew up listening to country and after playing a trial session joined the band the summer before his freshman year at Central. “The only difference between a violin and a fiddle is that a violin has ‘strings’ and a fiddle has ‘strangs,’” Henning jokes. Henning knew he wanted a small school, one where he wouldn’t be just a number. Central’s community resonated with him. “Every college you visit, they all say they’re like a family,” Henning says, “but Central was the only one that really felt like that.”

Henning has played football since sixth grade, and he was impressed that at Central he could be both a musician and an athlete. The music and athletic departments of every other school Henning visited tried to persuade him to choose one passion over the other. Central was the only school whose programs each encouraged him to play both in the orchestra and on the football field.

Now, Henning practices with the High Bank Boys and plays weekly concerts with them throughout Iowa, and his professors and coaches check out his shows from time to time. He continues to hone his classical music at Central through viola lessons and even found time rejoin the Preucil School String Orchestra to play concerts in the Baltic states between his freshman and sophomore years at Central.

Henning’s work promoting the High Bank Boys has given him real-world experience that helps him in his business and communication classes. He has already participated in four service-learning projects, including assembling a promotional video for Pella’s Christian Opportunity Center, updating marketing plans for Kahawa Cup fair trade coffee in Oskaloosa, conducting market analysis for Dorothy’s House in Des Moines and executing a public relations campaign for Al Éxito in Ottumwa. Henning enjoys service-learning because, as he says, “It gives you a chance to apply what you’re learning in class in a real-world function, and at the same time, you get to help a good cause, because they always pick really good places to assist and that you can feel good about helping,”

The son of a farming family, Henning’s favorite class at Central has been Oral History of the Family Farm. “I enjoyed going to it every day,” Henning says of the class, in which he collected farmers’ oral histories and condensed them into podcasts. “I did two farmers; the others mostly did one, I believe.” Henning’s passion for farming also led him to become the president of Central’s Agriculture Club, for which the High Bank Boys hosted a barn dance in Central’s A.N. Kuyper Center Athletics Complex in April.

After college, Henning plans to work in sales or marketing for an agricultural corporation. Henning got a strong start on his plan by attending Central’s Internship Fair during his sophomore year when he connected with Vermeer Corporation in Pella. Henning secured a full-time summer internship at Vermeer as a product specialist with the company’s Treecare, Rental and Landscape group.

“My internship at Vermeer wasn’t just making coffee and running copies,” Henning says, “I really got hands-on experience of what a product specialist was doing.” He helped Vermeer with dealer relations, learned new analysis methods and even made sales trips to Texas and Indiana. Henning was rehired by Vermeer for this coming summer.

After spending some time with an agricultural corporation, Henning plans to return to Hartwick to build up his family farm. Along the way, he says, “Music is still part of the plan. There’s always going to be somewhere to perform.”

The “Big” CMAs? Maybe they’re not so far away after all.